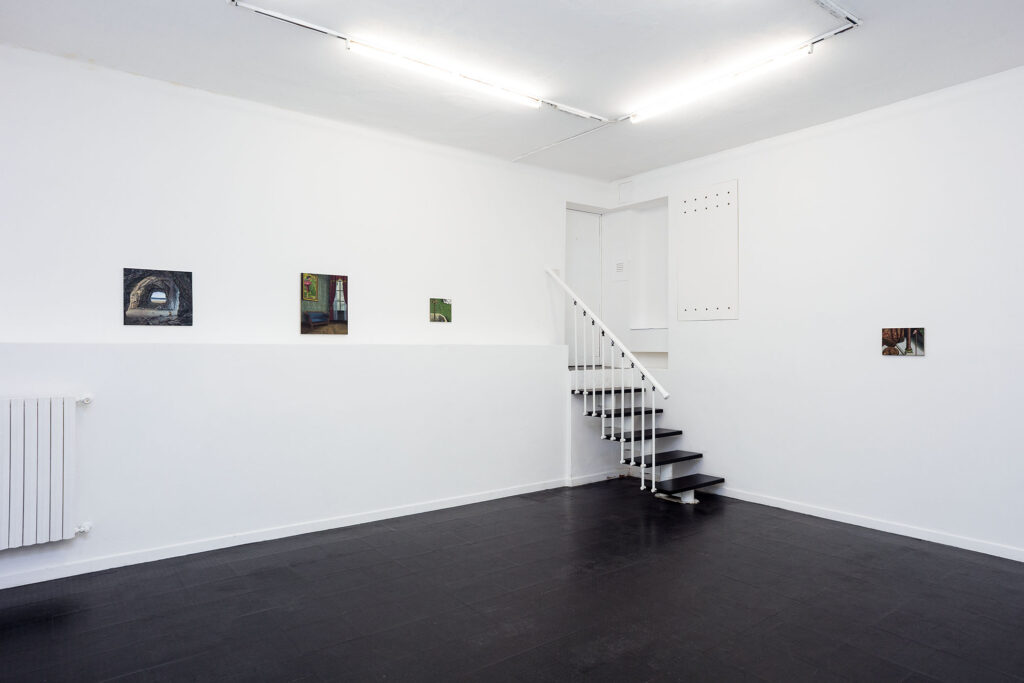 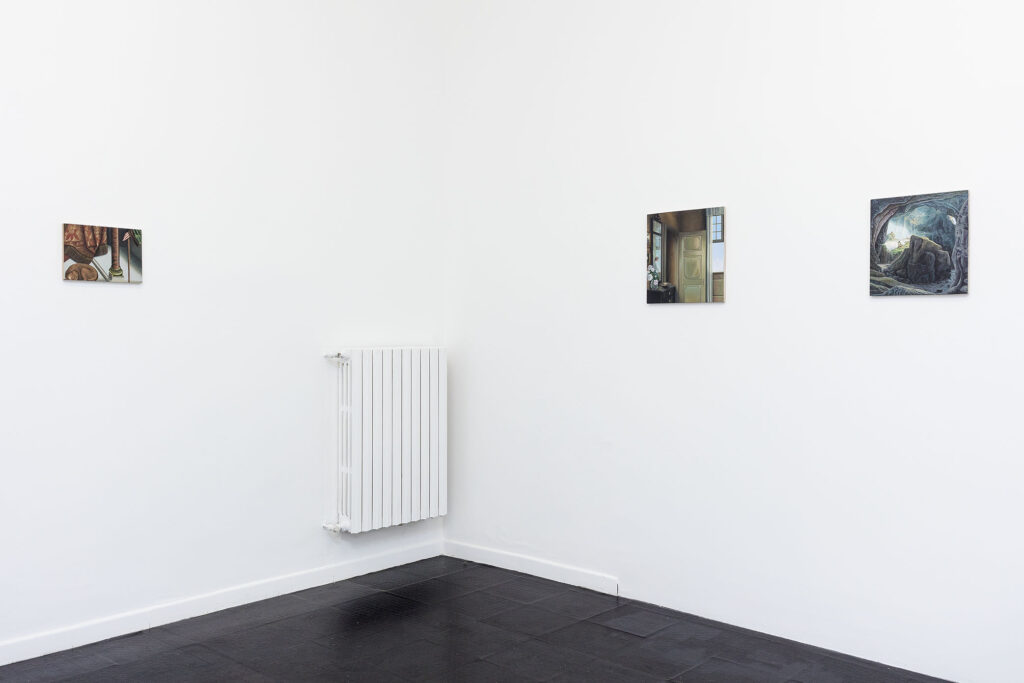 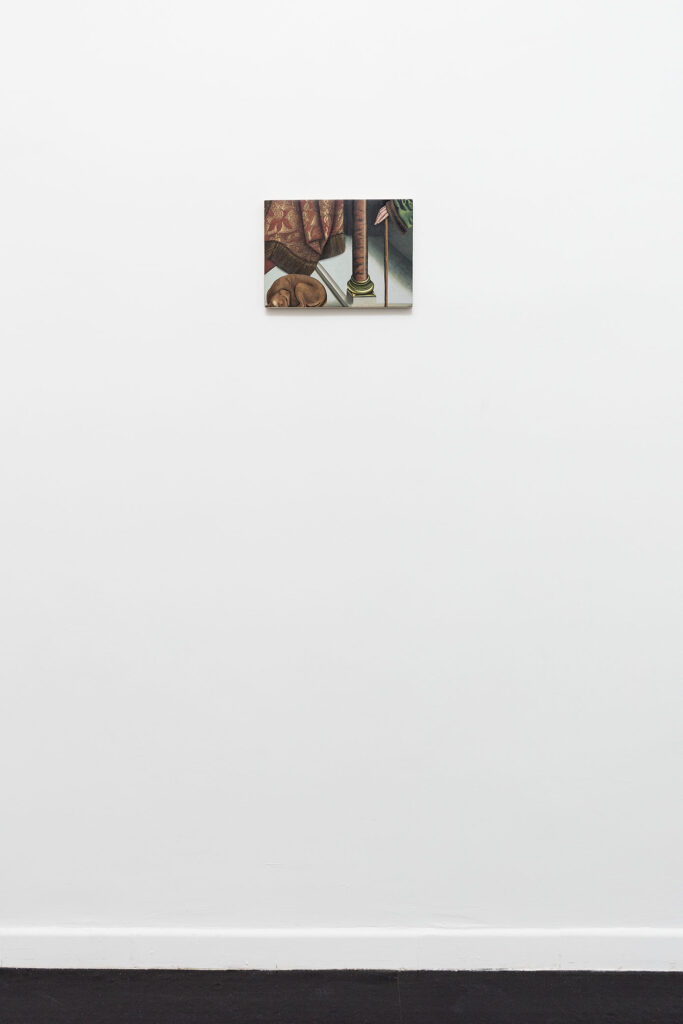 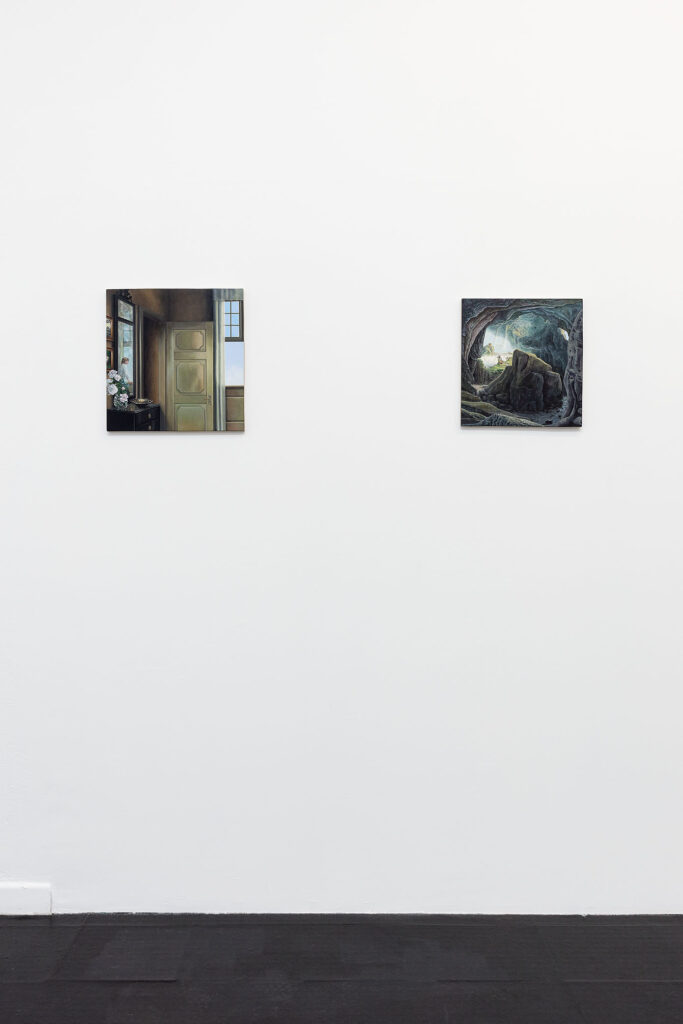 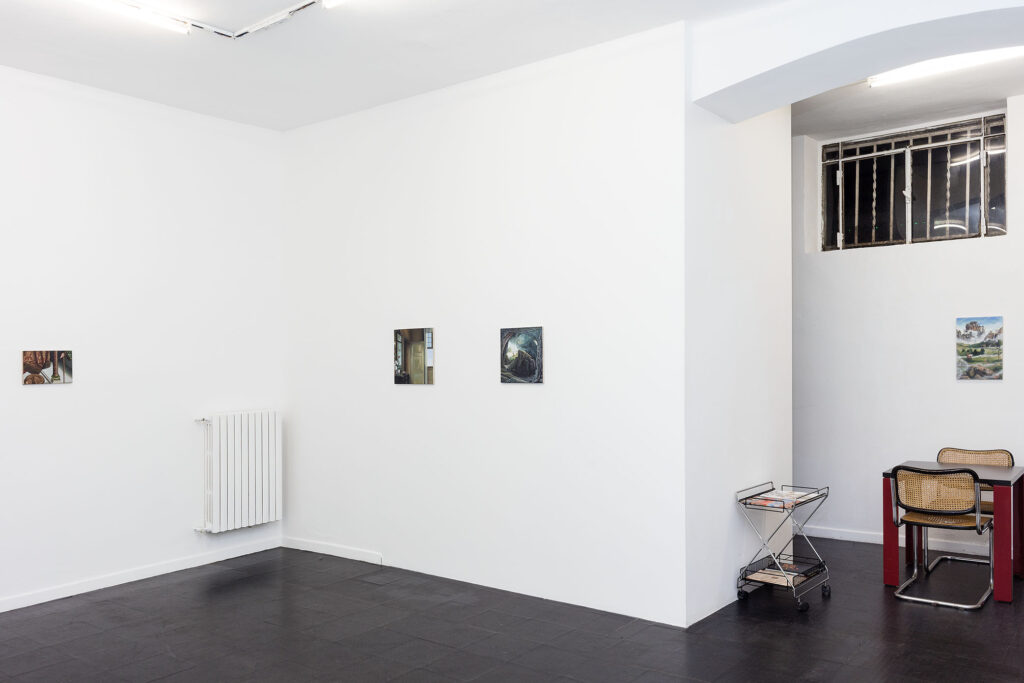 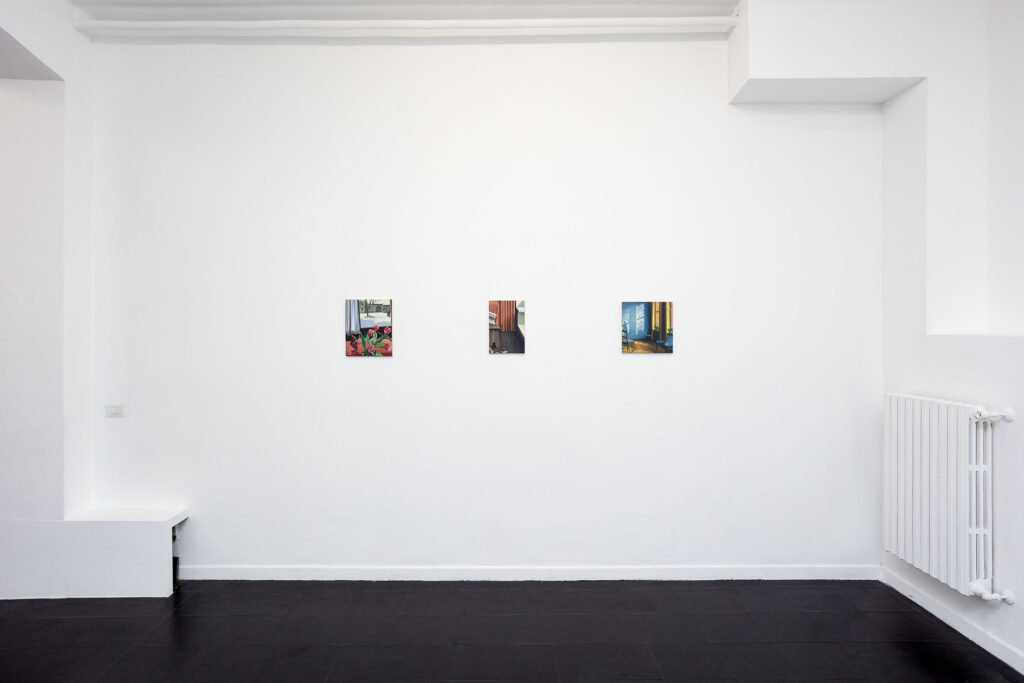 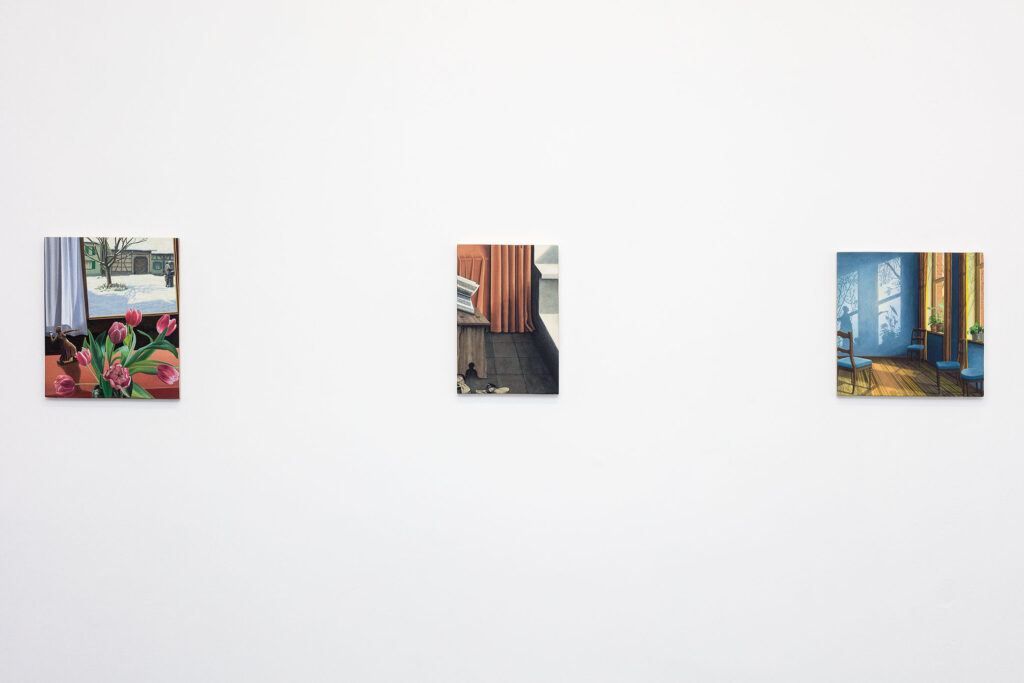 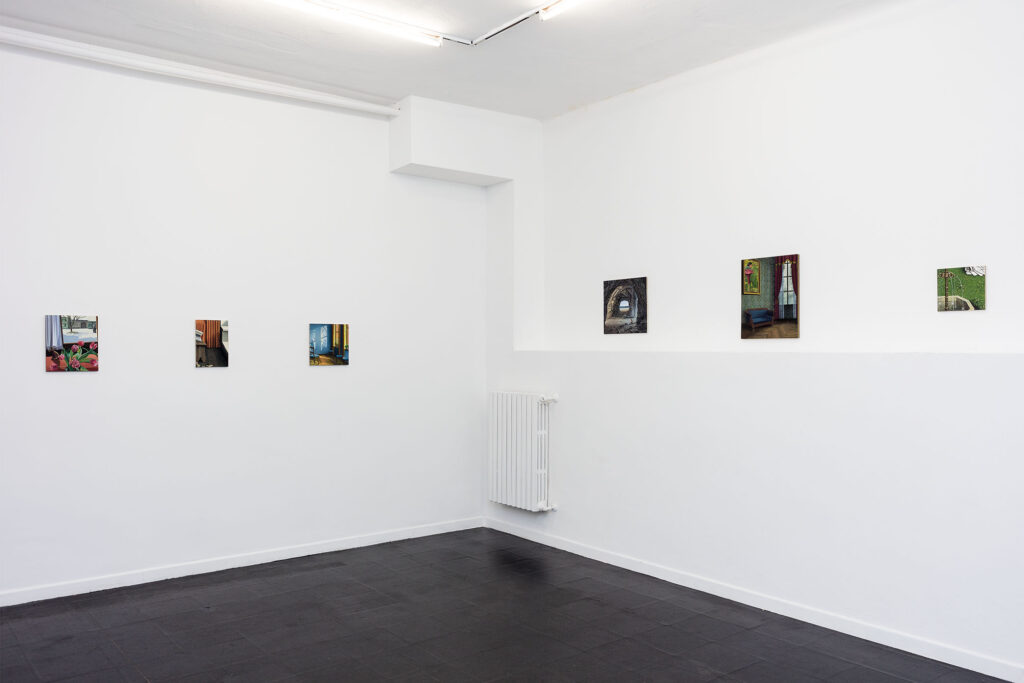 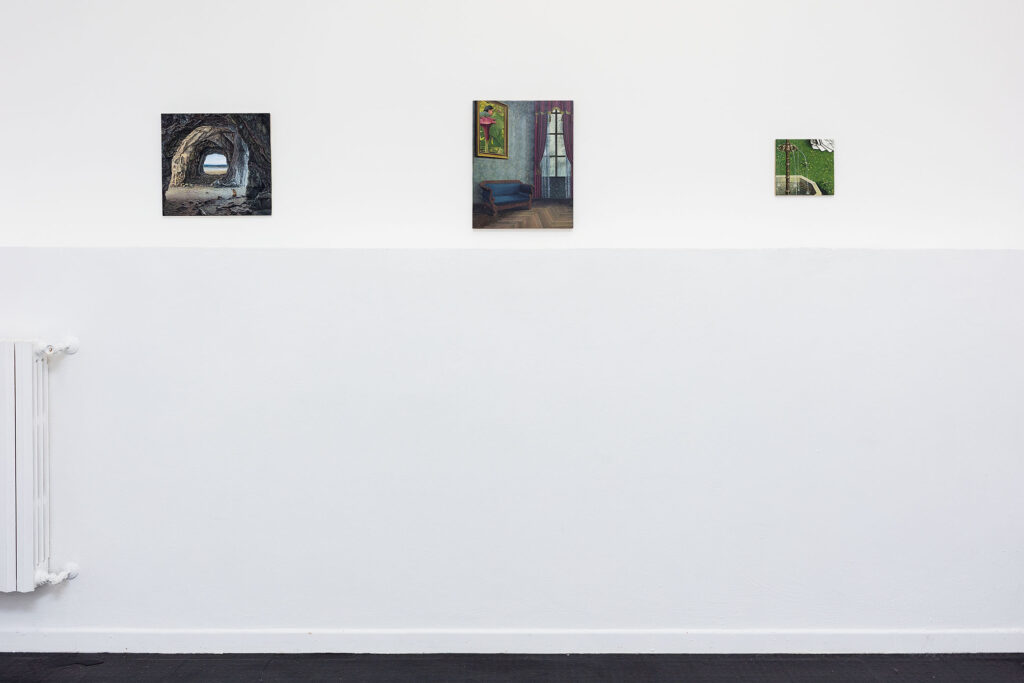 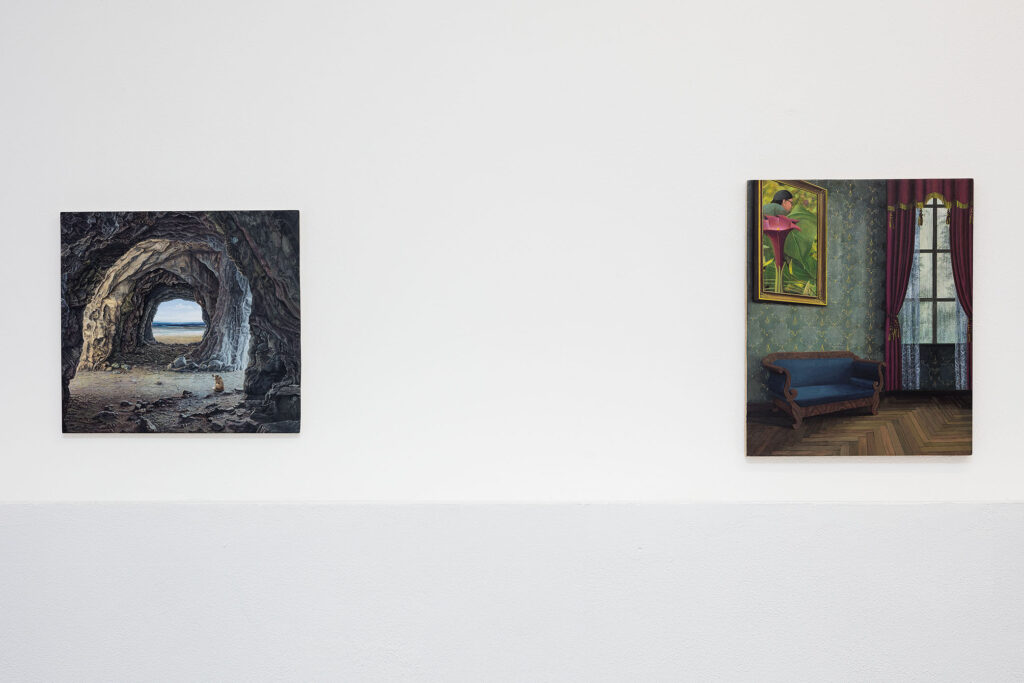 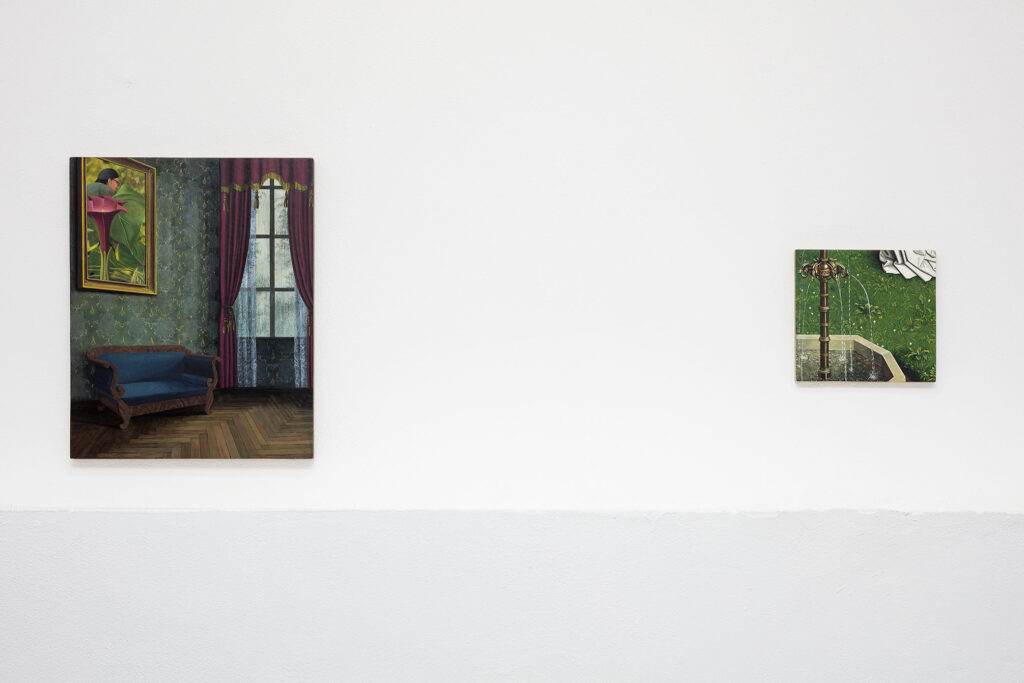 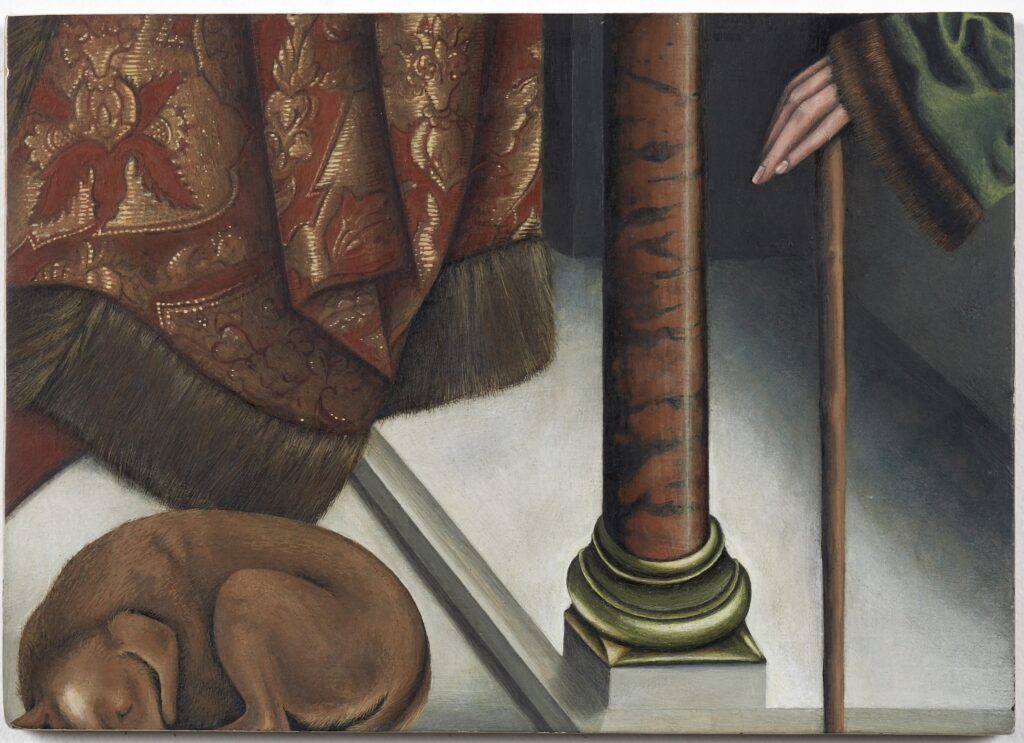 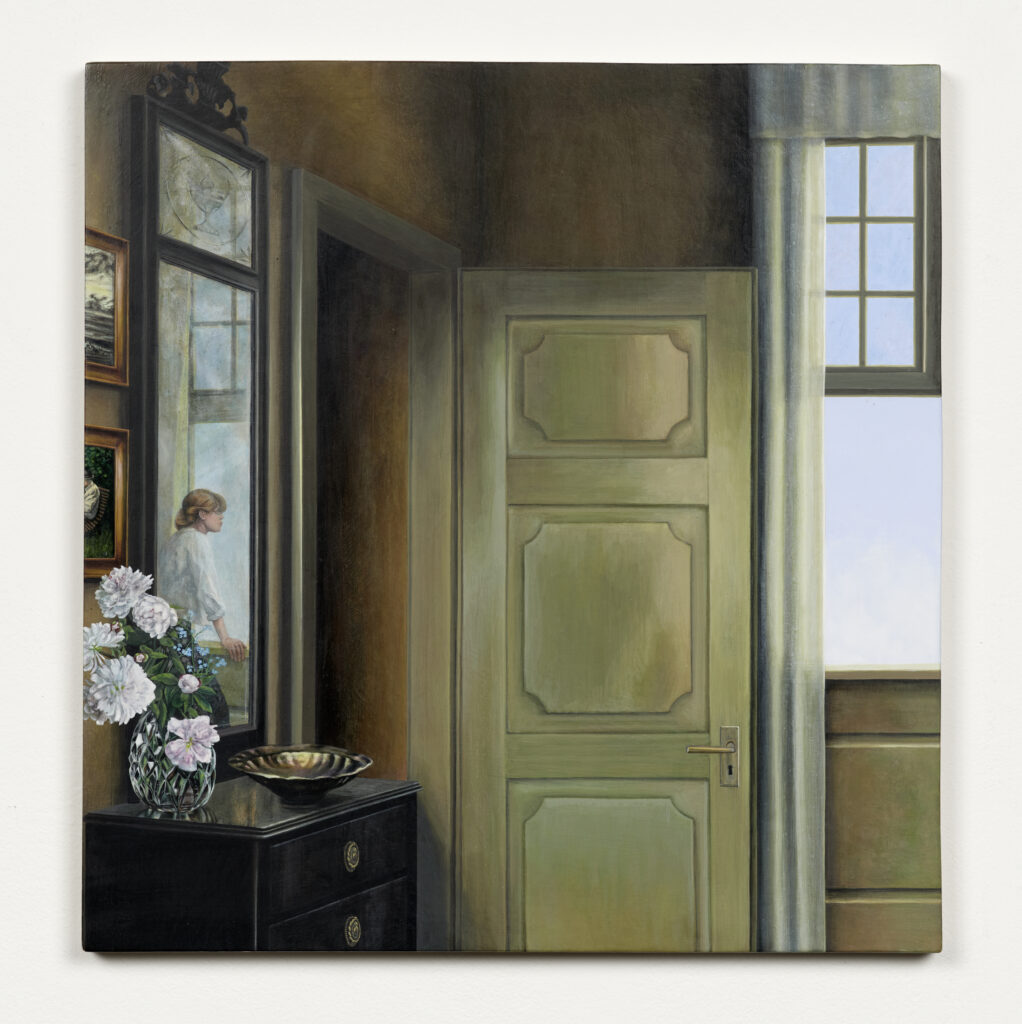 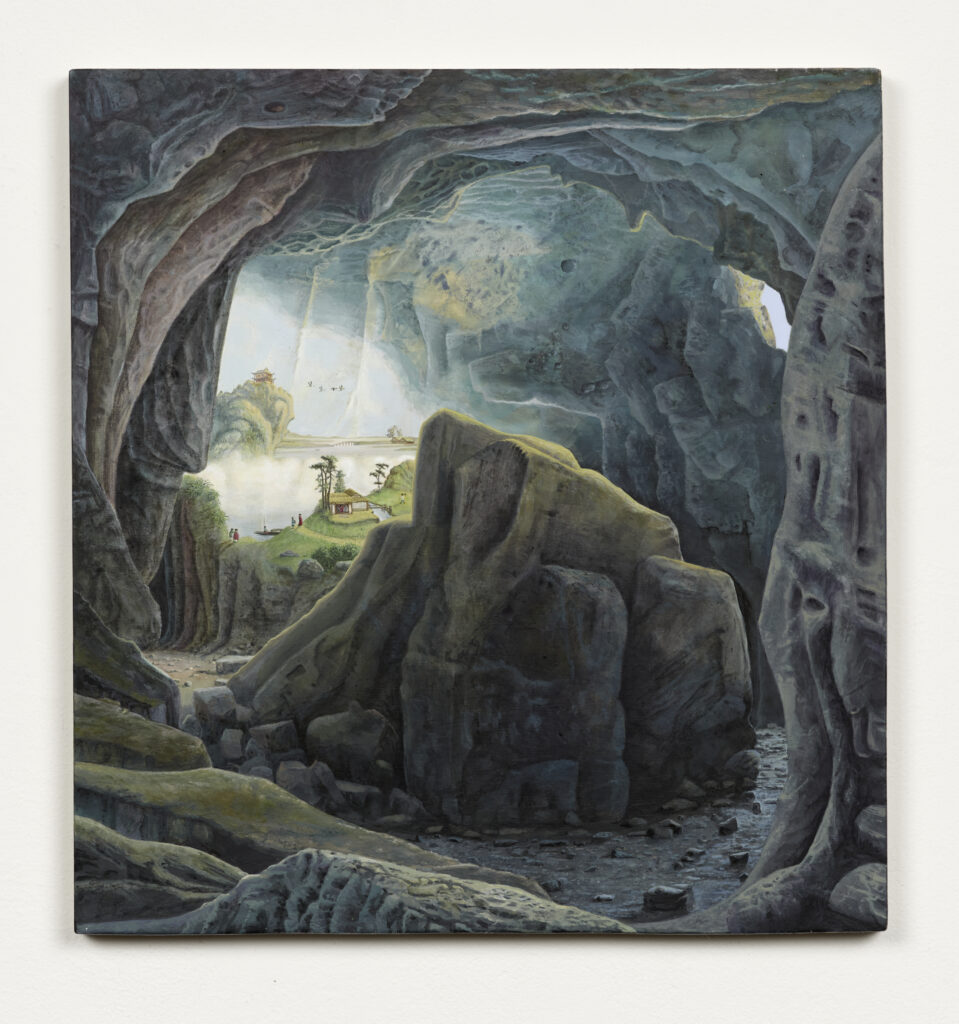 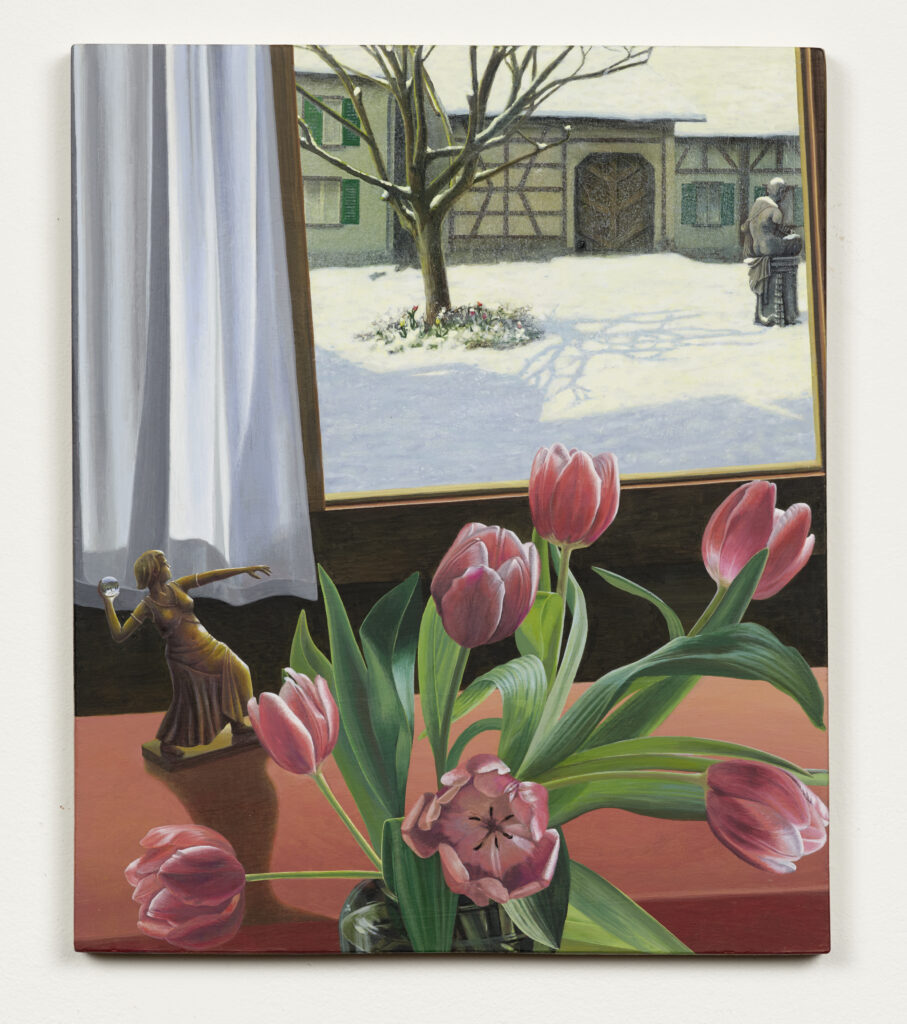 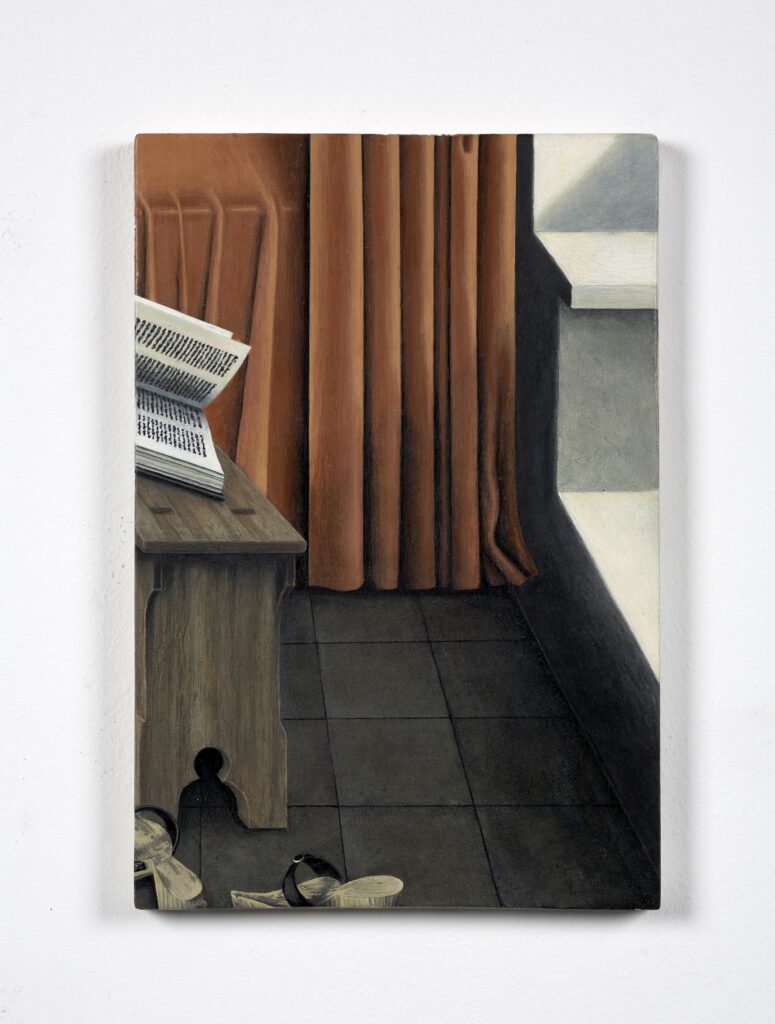 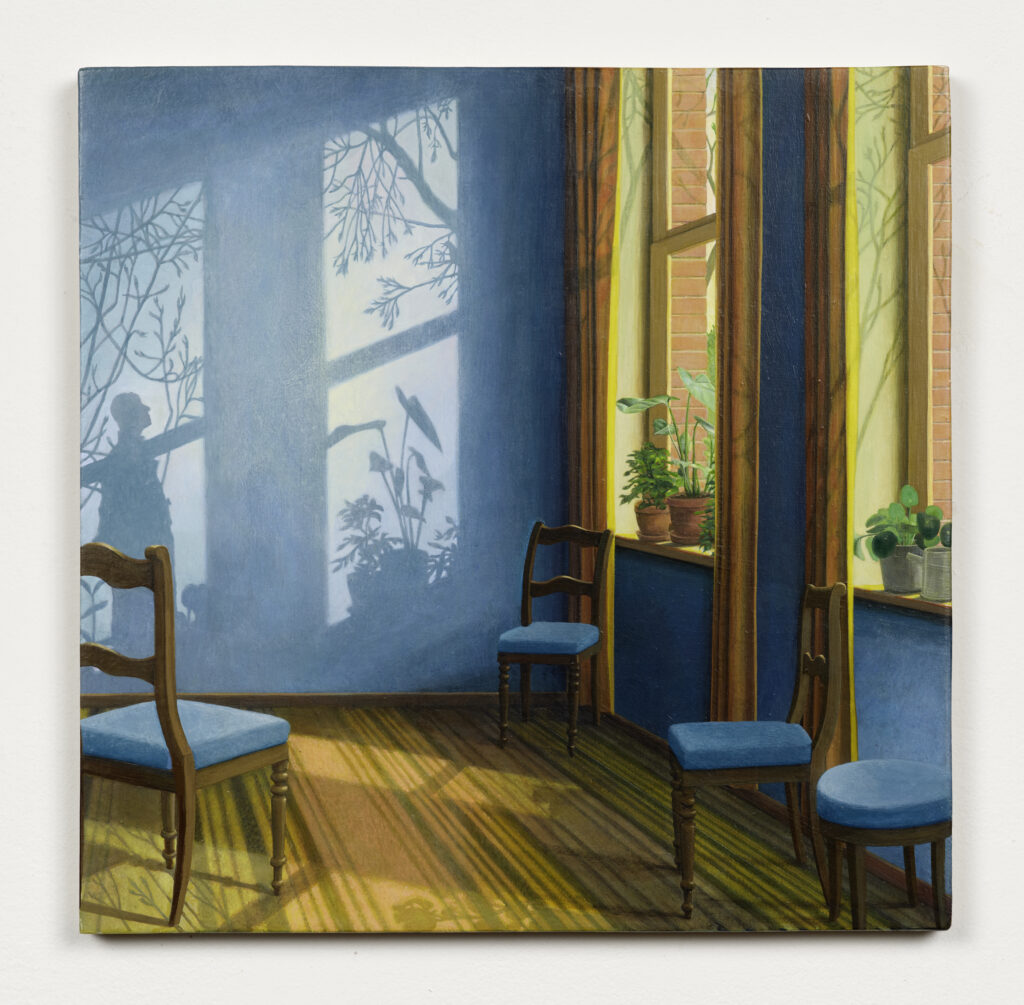 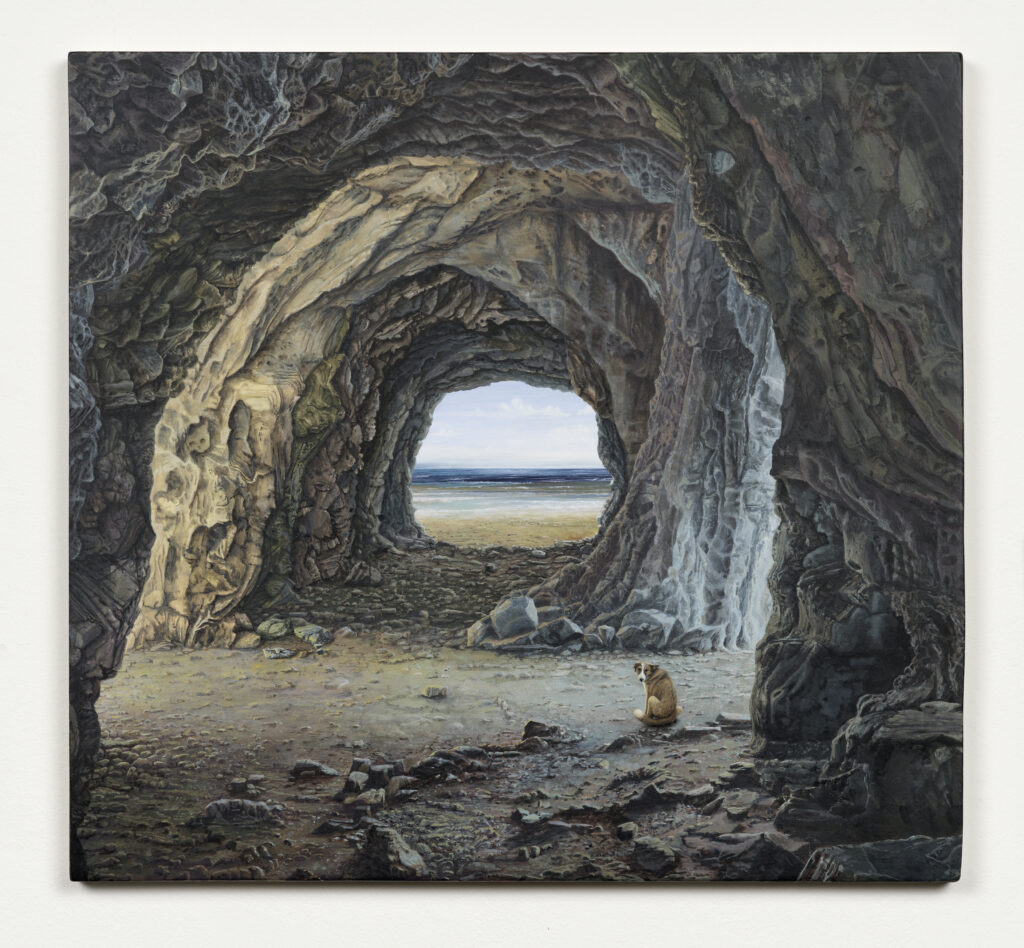 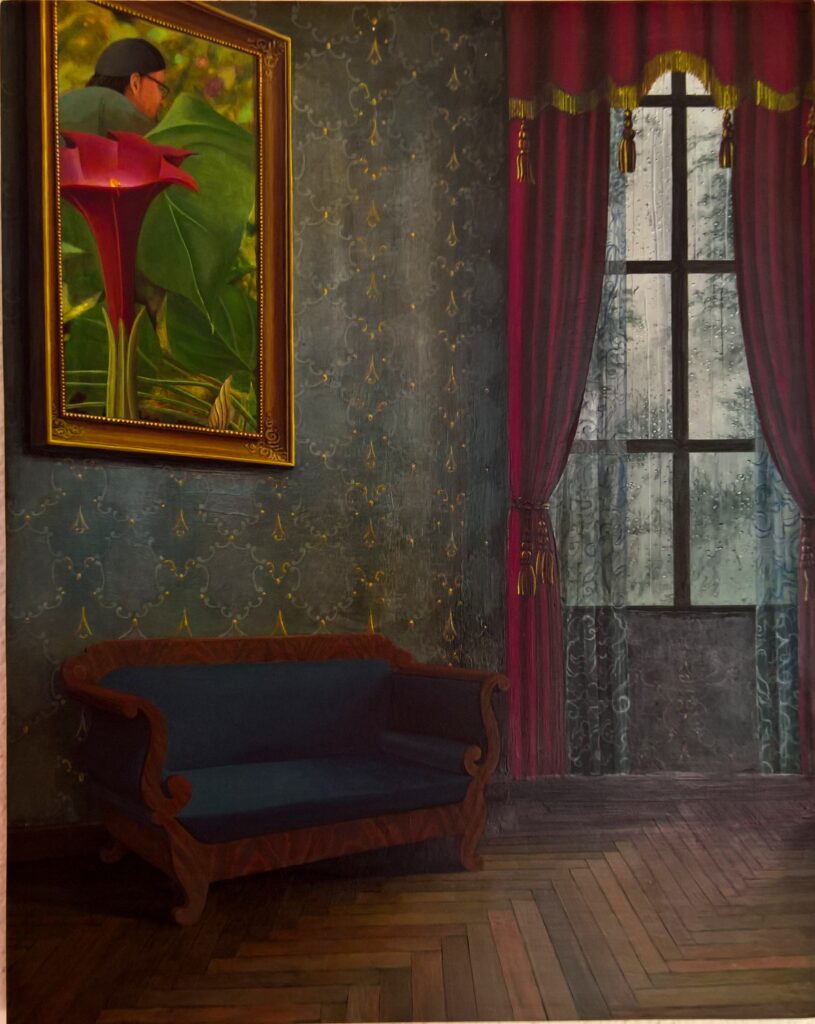 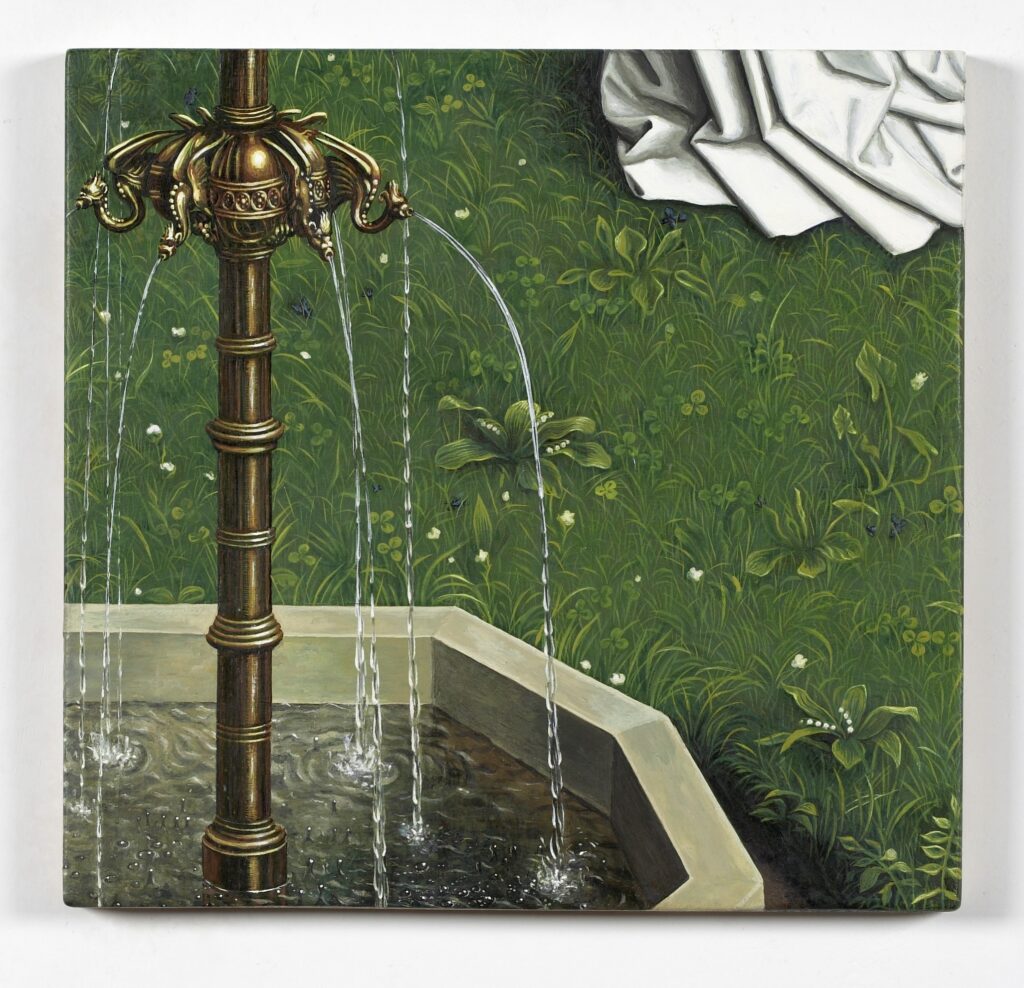 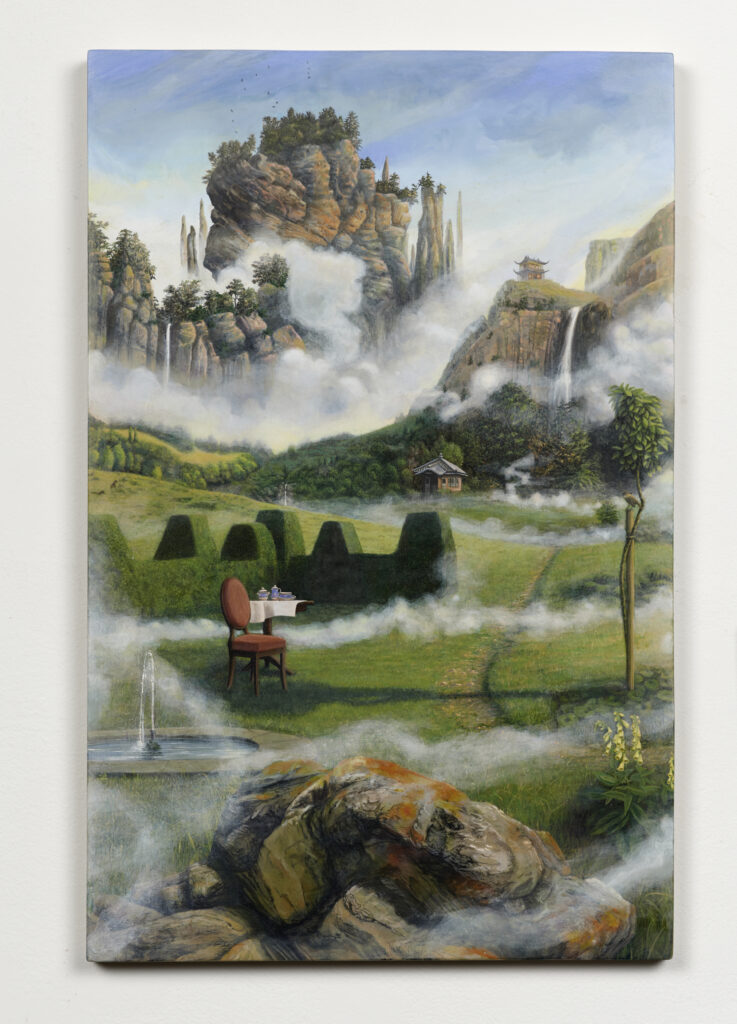 This conversation has been inspired by Bildbeschreibung (Description of a painting) by the German playwright Heiner Müller.

Bildbeschreibung is the detailed description of an immaterial painting, that no one sees and that perhaps does not exist. A memory’s journey, or maybe a currently reoccurring nightmare.

In the work of the German playwright, the words describe the image that is in front of us, they suggest where to look, they point out a detail, a color, a shape, they lead us to investigate the causes and the effects of what we start to see even if the painting is not there. In Müller’s work as much as in Rita Siegfried’s paintings, poetry springs from the sum of details.

Rita, how would you start describing one of your paintings that isn’t there yet?

I would start from the format.

The painting has a vertical format.

What does that represent?

It’s a snapshot taken late at night. On the left, the moonlight falls on a series of houses in a row, whereas the row of houses on the right stands in the shadow. Between those houses, you can see a faible light coming from a window, someone is still awake.

The scene is set in the mid-nineteenth century. There is a cobblestone street and a little wall where a guardian is sitting, he has fallen asleep. Following the road path, we can see it disappear in the skyline, dissolving into a nocturnal landscape. The horizon line is low and there’s a starry sky above it. City lights are shining from a distance. They are a bit irritating. What does the intense red line of smoke that we witness in the background mean?

Does this painting represent reality or is it the guardian’s dream?

It is the observer’s decision. In that image, time does not pass in a linear way, but different times coincide in it. It is a painting made up of several superimposed images.

As if they were the pieces of a puzzle?

Your practice seems to hold many clues. Which solution do we reach if we sum them up?

Maybe my practice holds some clues in it but there isn’t any solution.

I observed your paintings as an investigator that has to analyse the image, inspect it in order to be able to interpret it beyond its formal surface.

My aim wasn’t that. The most I expect to achieve with my work is to have a pleased observer standing in front of one of my paintings not understanding a thing.

That’s a very strong statement! Could you tell me more about it?

The human figure is often absent in your work, and when it is present, it is partially depicted or represented as an ambiguous or indirect manifestation. There is a man seen from behind in the painting Spaziergang (Passeggio), 2020, a woman seen in the reflection of a mirror in Vergissmeinnicht (Forgetmenot), 2020, the fragment of a face in Orsino, 2003, a hand mysteriously laid on a stick in Sleeping Dog, 2003. The scenes that you paint are often domestic but I have the impression that people have run away from the places, that those houses are empty or inhabited by shadows as in Blaues Zimmer, 2020.

People haven’t run away and I have no interest in exploring their absence. I rather imagine that they have just gone to another room. They are in the same space and they could be part of that image, but they find themselves outside the frame, beyond the edges of the painting.

Like when in a group picture there’s someone on the side who is cut out?

Extract  from  a covesation between Fabio Cherstich  and Rita Siegfried

She received the Aeschlimann Corti scholarship in 1996 and ‘Werkbeiträge’ from the city of Bern in 2001. Recent exhibtions include