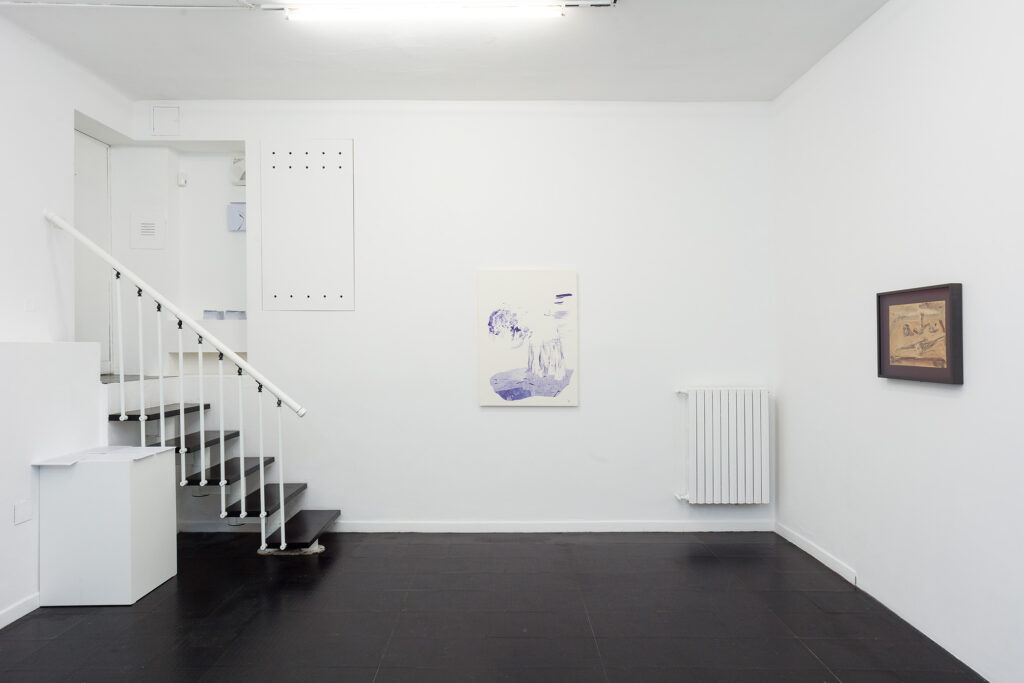 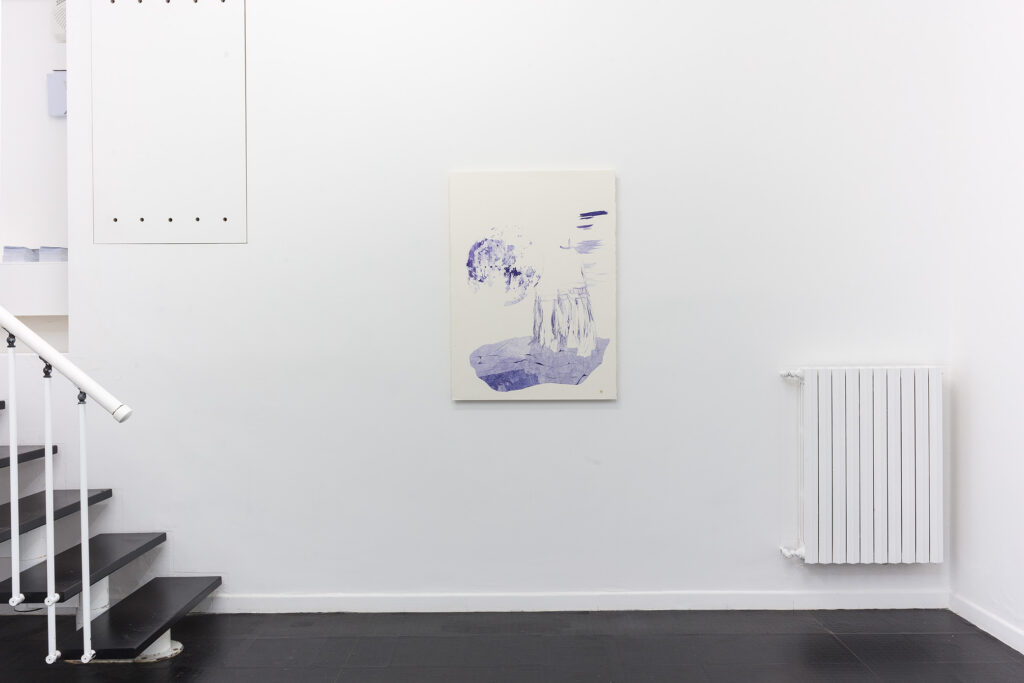 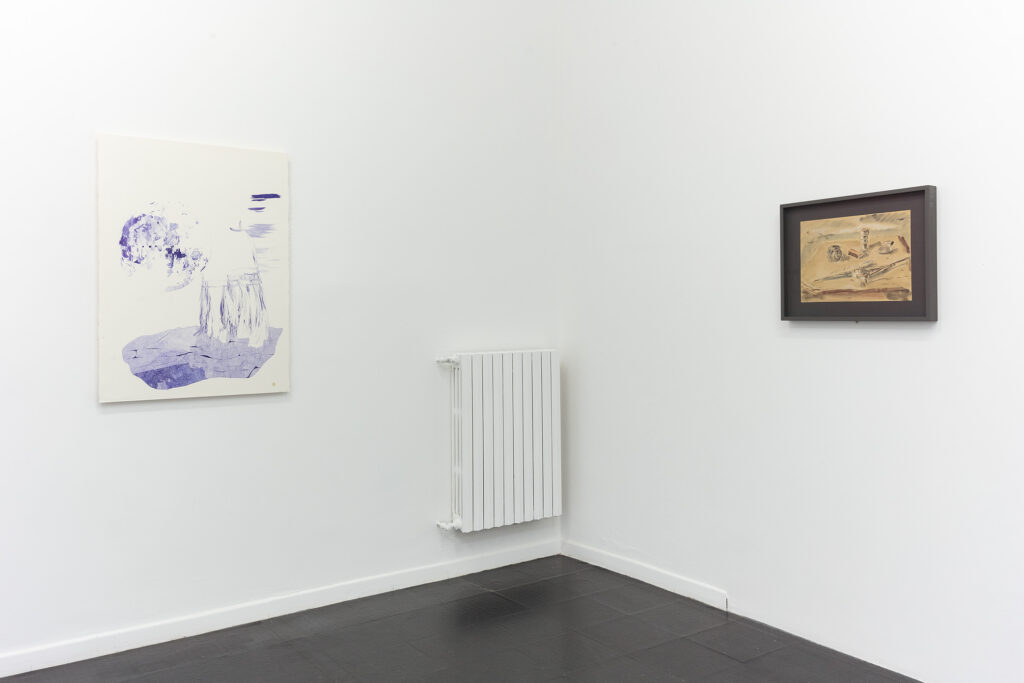 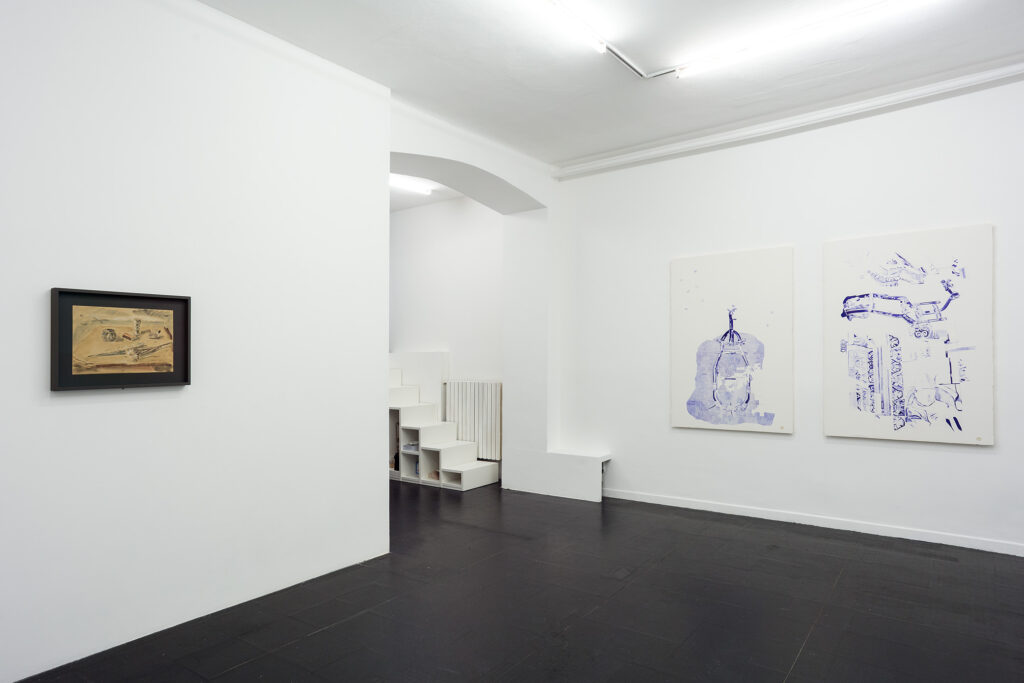 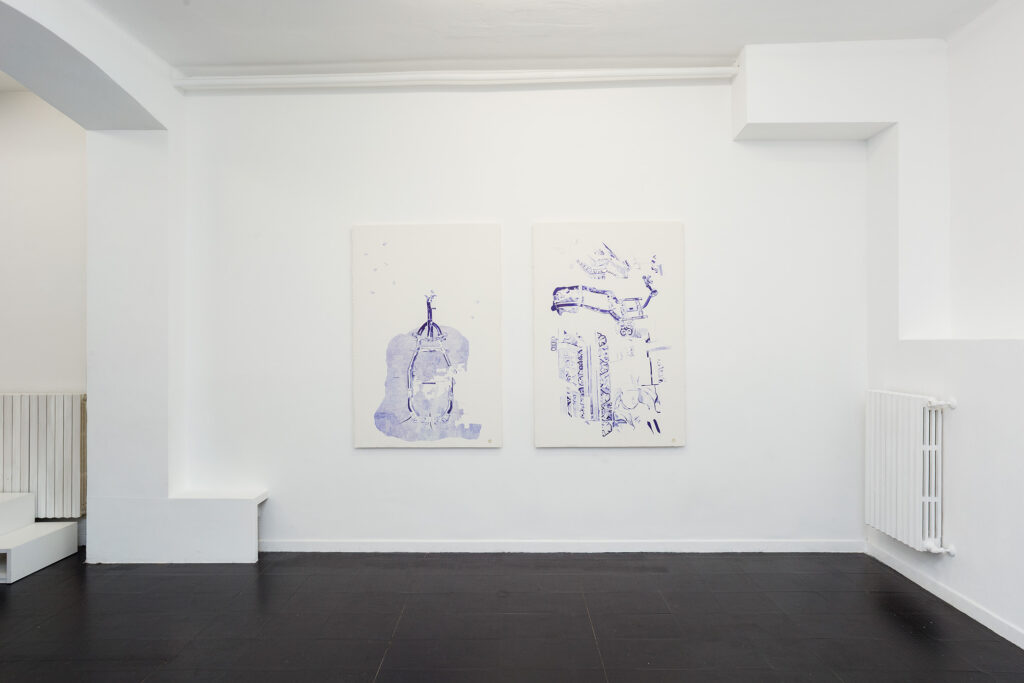 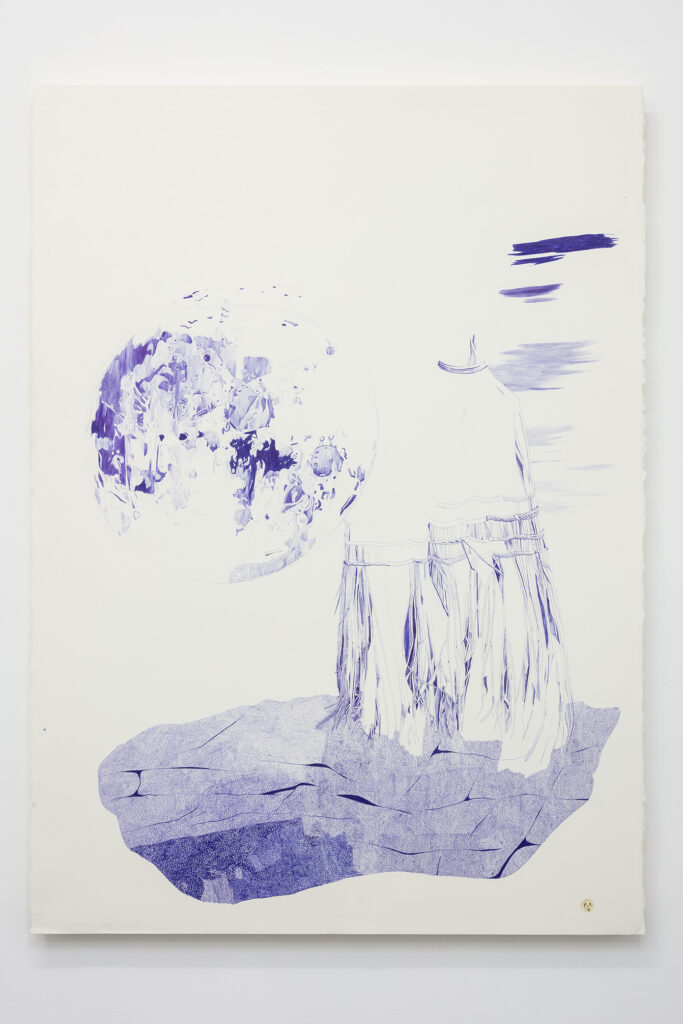 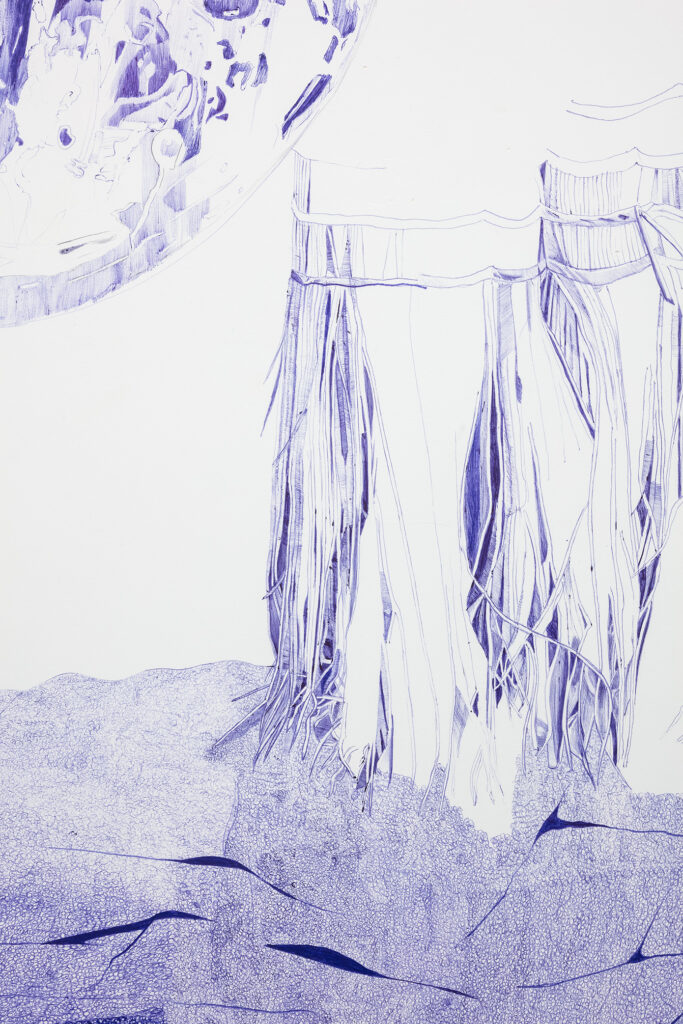 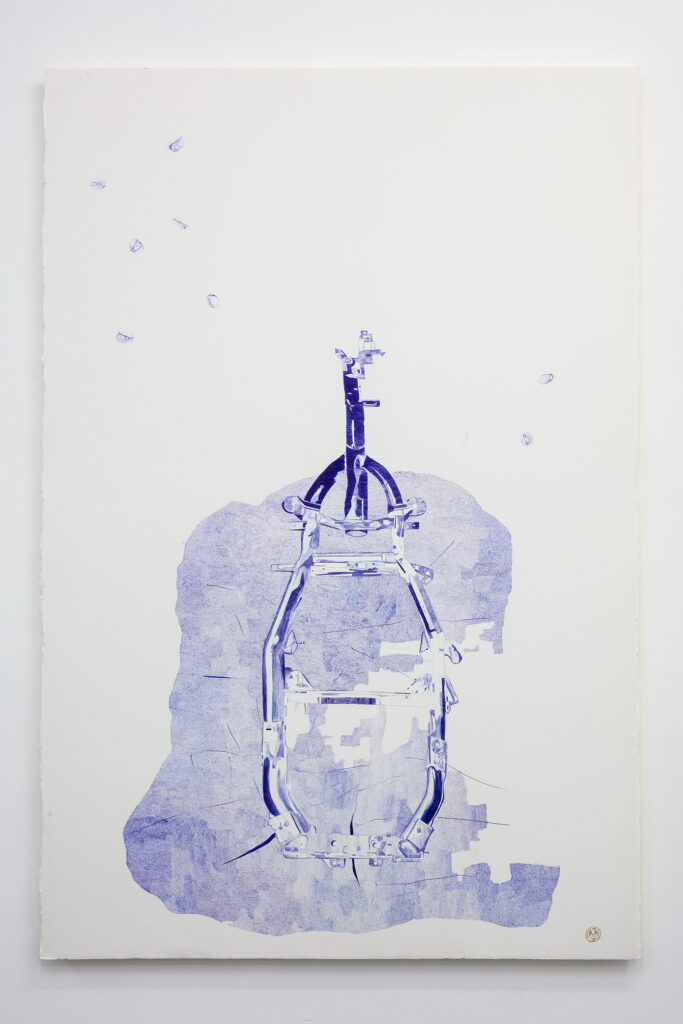 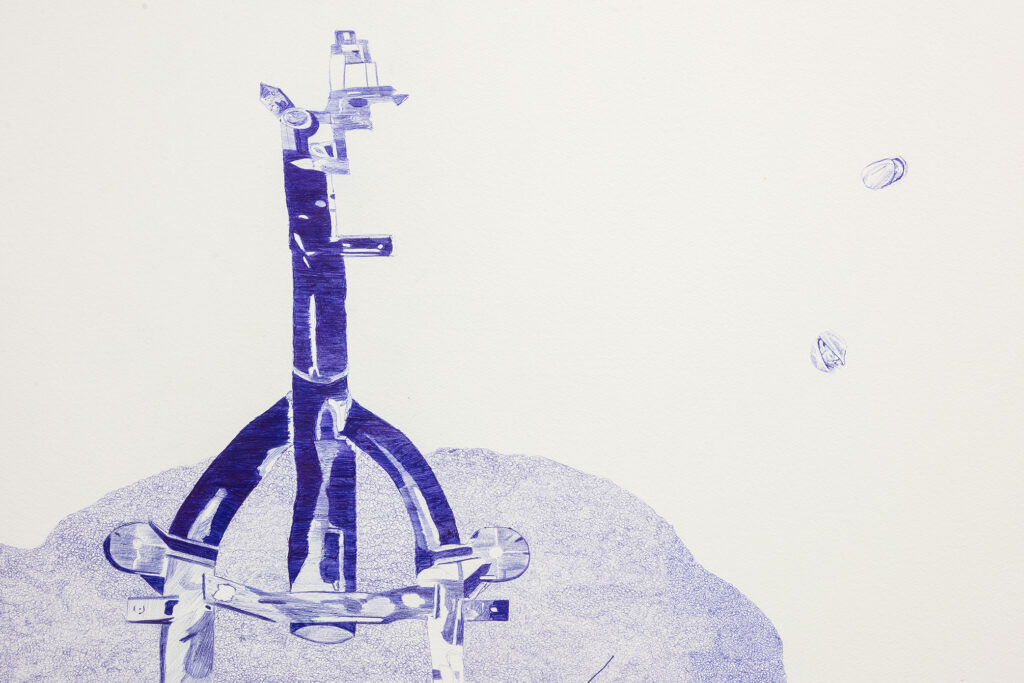 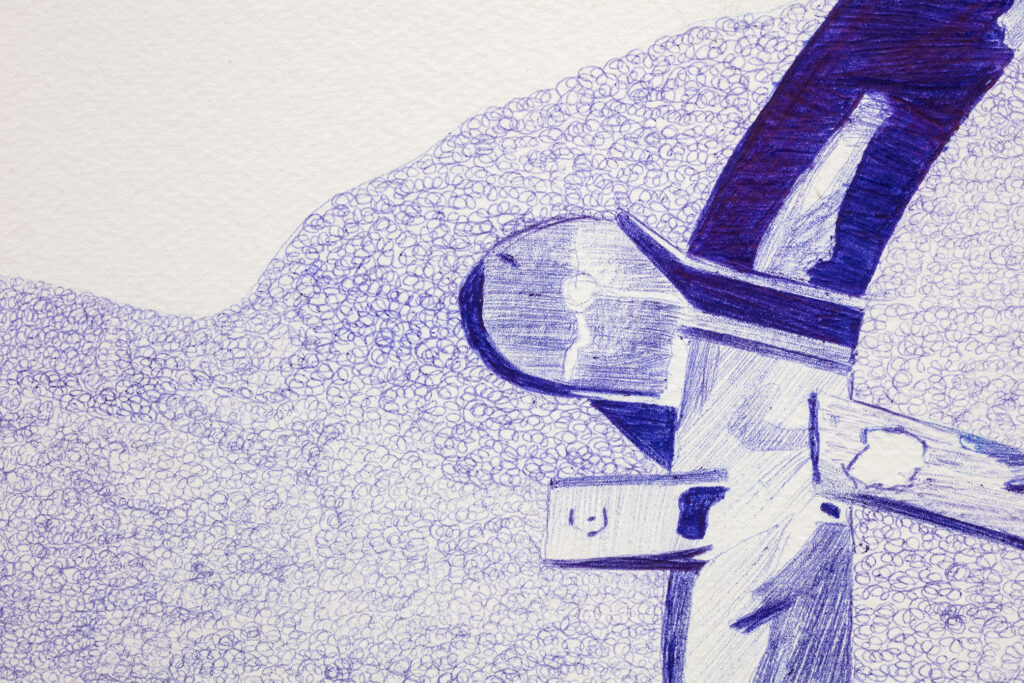 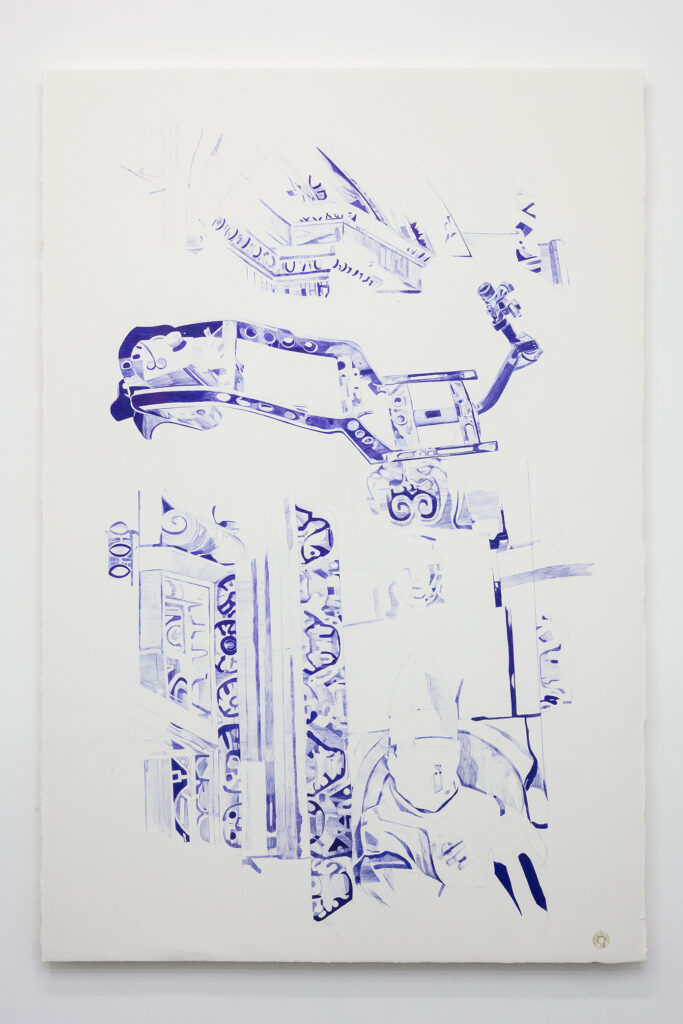 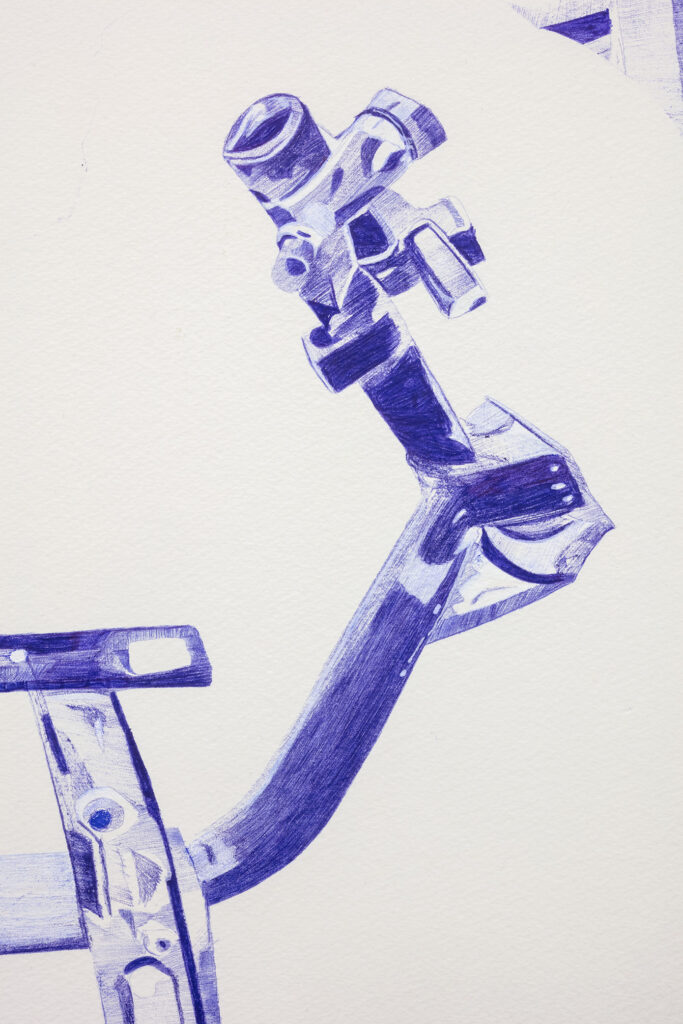 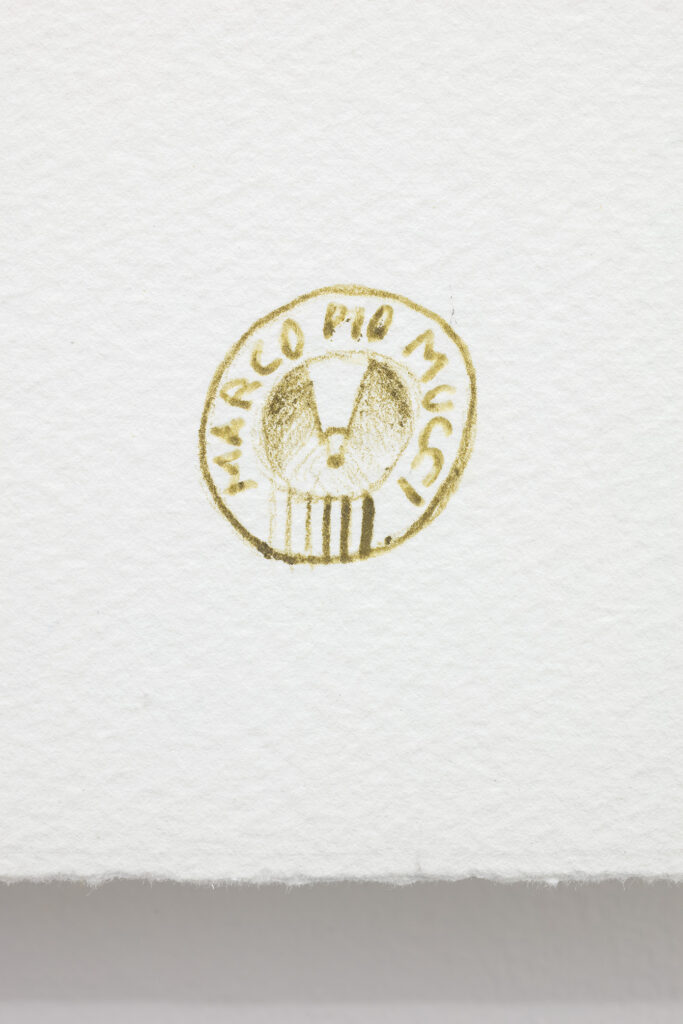 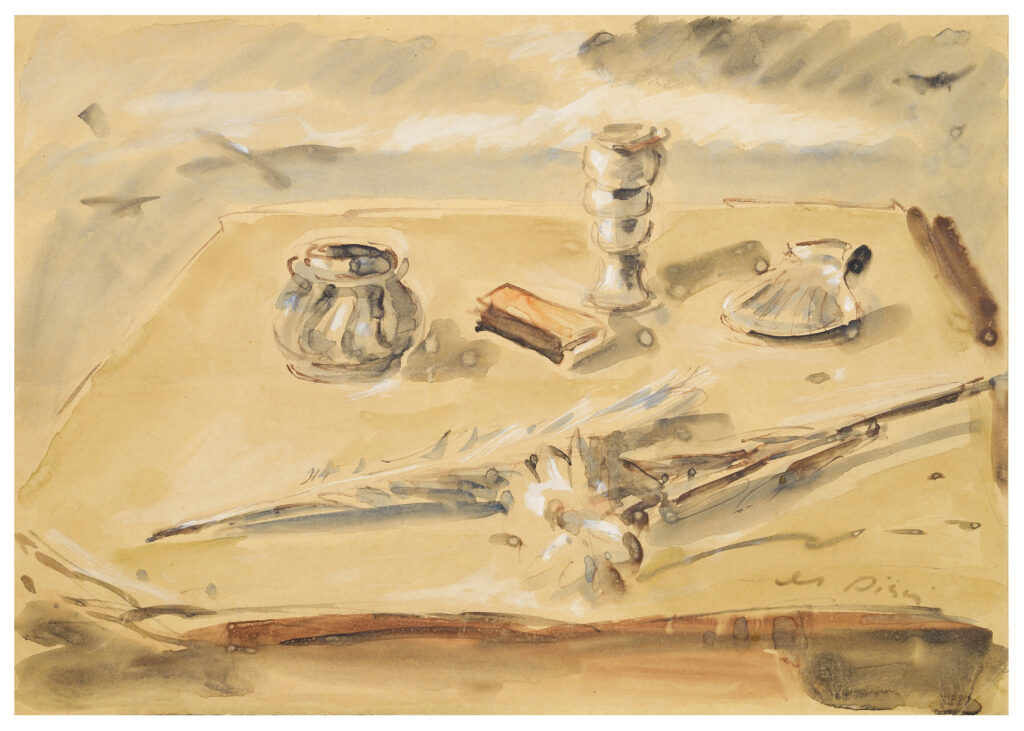 “Marco Pio Mucci is the enemy of the enemies of stupor mundi”, Daniele Milvio recently wrote. This is probably the most accurate definition of the artist’s practice. As an ever inquisitive and keen investigator of the objects around him, Mucci has his gaze constantly trained on the wonderful artifacts of everyday life. A broom, the asphalt, some dilapidated scooter frames. The still life of living skeletons only confirms the meaning of this astonished gaze.

Organized on the first edition of Milano Drawing Week, the exhibition set up in the Castiglioni gallery showcases three drawings on print by Mucci and a watercolor on cardboard by De Pisis dated 1944: Senza titolo (natura morta con oggetti, penna e fiore). The encounter between Mucci’s and De Pisis’s work happened through the “Collection Ramo,” which offered a few masterpieces of major twentieth century artists to a series of contemporary artists during Milano Drawing Week. Among the many masters of the twentieth century, Mucci chose De Pisis, the eclectic and unclassifiable artist from Ferrara, who repeatedly approached the still life theme throughout his career. However, the choice of De Pisis is not only linked to this theme, but also to a shared predilection for drawing, which both artists saw as fertile ground for experimentation. For Mucci drawing does not represent a preparatory instance, a supporting or auxiliary item to outline the work to be done. It is rather his chosen medium, the expressive language that he increasingly favours, ever more so since founding the publishing house Sgomento in 2017, together with his artist friend Matteo Pomati.

In the exhibition The still life of living skeletons, Mucci’s interest in this medium is for the first time expressed in large formats that he installs on wooden panels, without frames, in an open dialogue with the watercolor of the famous Italian painter and poet. The aspect that seems to bring Mucci’s and De Pisis’s work closer together is primarily that “mimetic and alienated” attitude typical of the poetics of the Ferrara artist. But if De Pisis strives to conceal this precise affection, as a sort of basso continuo, Mucci’s graphic works amplify it and make its blatantly visible. Above all, there are two elements that contribute to highlighting the “oniric” character of his drawings. The first is that relating to the non-finito technique, which Mucci uses in all the works on display, verifying in a concrete and unsettling way the expressive possibilities of the unfinished: his lines are always interrupted, broken, as if they had been abandoned as they reached their splendor, to never end, to carry on forever. After all, yielding to the temptation of the non-finito almost always overlaps with
the spasmodic search for the infinite, but it is also the Promethean attempt to show the processes that lead to the construction of the image. In this sense, the artist reveals further clues to us as he produces his works with a single pen, as if he wanted to show us the different pressures he exerted on the paper sheet, as well as the pauses between gestures. The second element that strengthens the alienating dimension of these graphic works concerns that which the artist himself defined as “an iconography of hidden knowledge”. Mucci’s drawings
are populated by a series of enigmatic, mysterious, vaguely recognizable elements and figures. One of the two large monochromes depicts the stylized face of a cardinal (or perhaps a bishop); the work Senza titolo, senza cuore (2021) shows a section of asphalt that appears to be wet with blood. Likewise, indulging again in this sort of “secret syntax”, Mucci conceals the real reason for his combinations: the constituent items of his works seem to be held together by illogical relationships, even as regards their out-of-scale proportions: the rusty frame of a dilapidated moped stands out on the barely sketched facade of the Milan cathedral; what looks like a moon studded with craters is flanked by a giant broom and, again, skeletons of mopeds surrounded by pistachios, as if they were stars. Although in the artist’s drawings there is never any trace of a narrative progression or a fictional scenario, his works expand into a remote, fantastic, imaginative space. A universe where all things, like living skeletons, can have a last beat of existence before slipping forever into the darkness of the end.